Manufacturers like Jaguar always try to stay alert to new technology that might improve their products and lots of things are investigated along the way that never reach fruition and rarely become public knowledge.

A surprising number of ideas that look good, but founder when they first appear, return later when technology, politics, or some other factor, provokes the jump from mere curiosity to a useful step forward.

Variable valve event systems always seemed to be desirable but only became viable when driven by demands for reduced emissions, better fuel efficiency and increased performance. Now it is rare to find an engine that does not have some sort of variable valve timing system.

Jaguar had long had a ‘flow room’ in which to conduct experiments with port shapes and sizes and charge movement within the cylinder. I remember being fascinated by all the different prototypes, mostly made of wood, stacked on shelves in the flow room. There was much investigation of this sort behind the port and head designs of all Jaguar engines in the days before modern computer modelling, itself following on from data gathered from such empirical work.

In the 1970s virtually every manufacturer experimented with ways of improving combustion often involving some sort of pre-chamber from which initial combustion could discharge rapidly into the main combustion chamber and Jaguar was no exception. Pre-chambers like the Ricardo Comet had been used in Diesel engines for many years and there had been various proposals for spark ignition engines that never prospered but by the 1970s pressure to improve fuel efficiency and reduce emissions prompted a lot of fresh experimentation.

At Jaguar some single cylinder experiments were conducted with a pre-chamber where the spark plug would normally be, charged through a small automatic inlet valve, but results at the time were inconclusive. This should not be confused with the May Fireball/HE developments that came a few years later.

Honda put a massive effort into launching its CVCC pre-chamber engine which seemed to be a significant step forward in the struggle to meet 1975 emissions standards but was rapidly left behind with the arrival of lambda feedback and the three-way catalyst, followed by the widespread adoption of the four valve cylinder head layout. 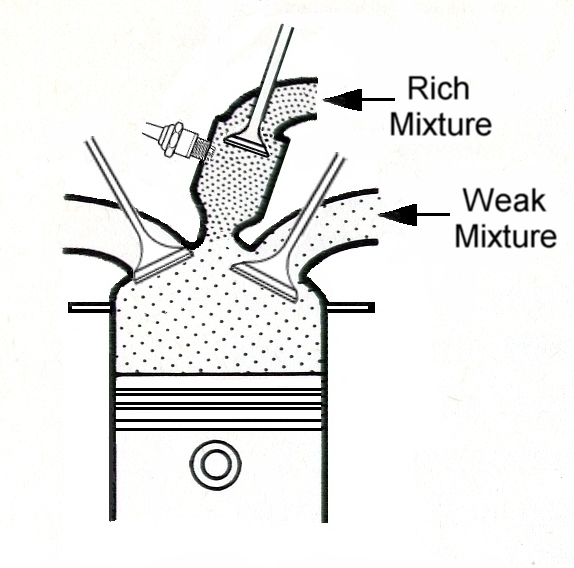 A combustion chamber with four valves around a central spark plug was hardly new – it first appeared on the outstanding L3 Peugeot race car of 1913. There had also been numerous narrow valve angle four valve engines before, notably the Rolls Royce Merlin with four vertical valves, but the spark plugs had generally been at the periphery instead of being ideally located in the centre. It was not until the 1960s when Weslake and Duckworth independently and simultaneously realised the potential of having the valves inclined at a narrow enough angle that charge movement could take place around a horizontal axis above a flat topped piston and under a central spark plug, thereby ensuring that good breathing would at last be combined with excellent combustion, as there would not be a humped piston crown in the way.

This again was a technology that Jaguar designers pursued throughout the 1970s with four valve V12, slant six, and even XK based prototypes. This work was heavily influenced by the Coventry Climax four valve F1 V8 raced successfully and powering Jim Clark to his second world championship in 1965.

An important lesson from that particular engine with inlet and exhaust valves splayed at 60 degrees apart and needing an abnormal amount of ignition advance, was the need to close up the valve included angle to obtain an efficient combustion chamber so it may well have inspired Weslake and Duckworth to make the breakthrough.

The illustrations here show impressive examples of the engine designer’s skill, taken from a huge full size cylinder head drawing by Jaguar engine designer Malcolm Halls. The full drawing includes copious detail notes about machining processes and heat treatment of the casting. Engine designers have to be fully conversant with many areas of engineering. 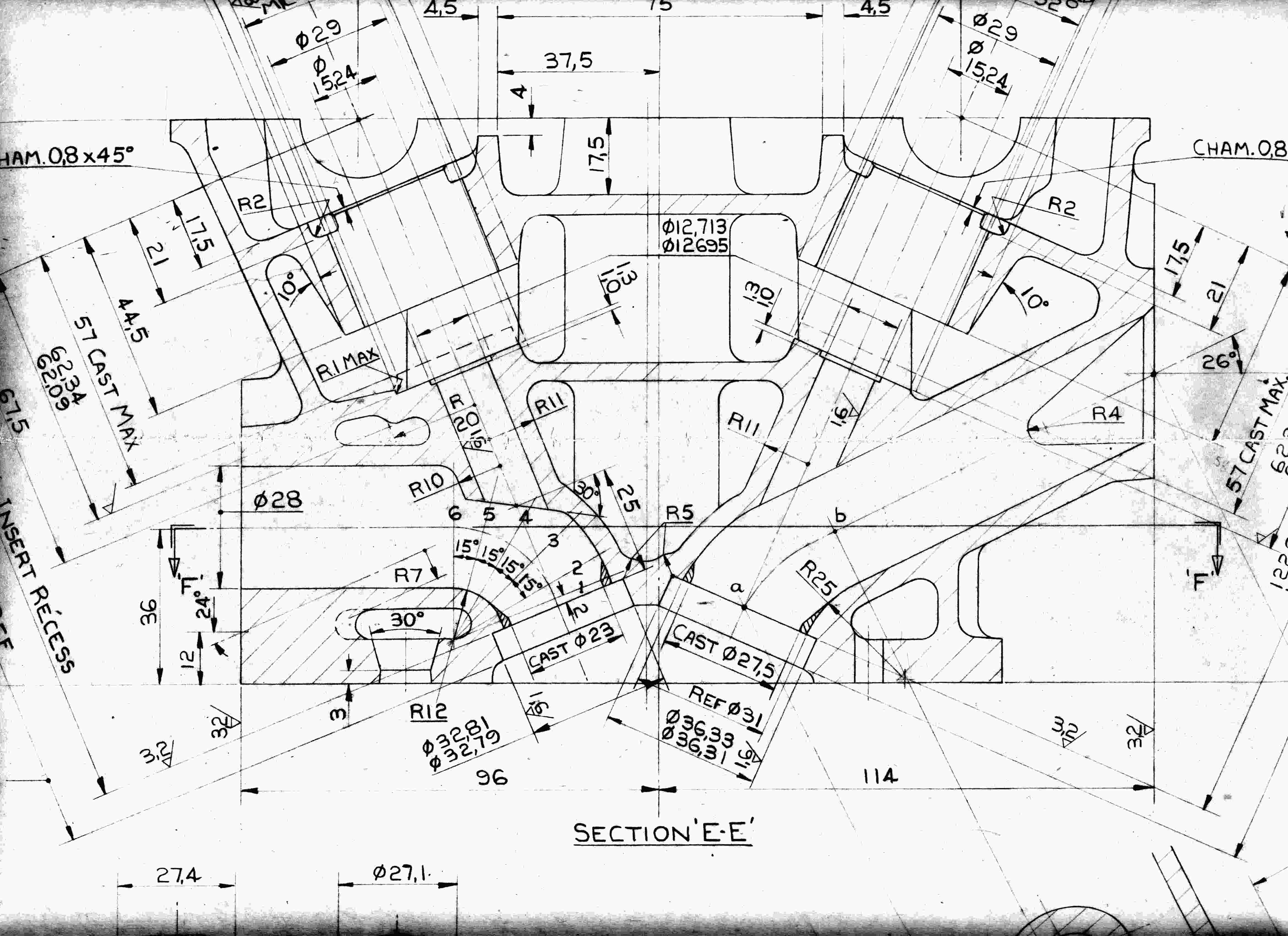 Malcolm Halls’ talent is obvious yet he was just one of many talented people working at Jaguar in those days. The engineering team at Jaguar was modest in numbers but high in quality compared to most other motor companies, a situation magnified by the absorption of Coventry Climax’s racing department.

The cylinder head shown here was for one of the slant six engines based on half of a V12.

Although some of these prototypes used chopped and welded V12 blocks, later versions used purpose made cylinder blocks with full solid decks so there was no need for peripheral studs around the water jacket. 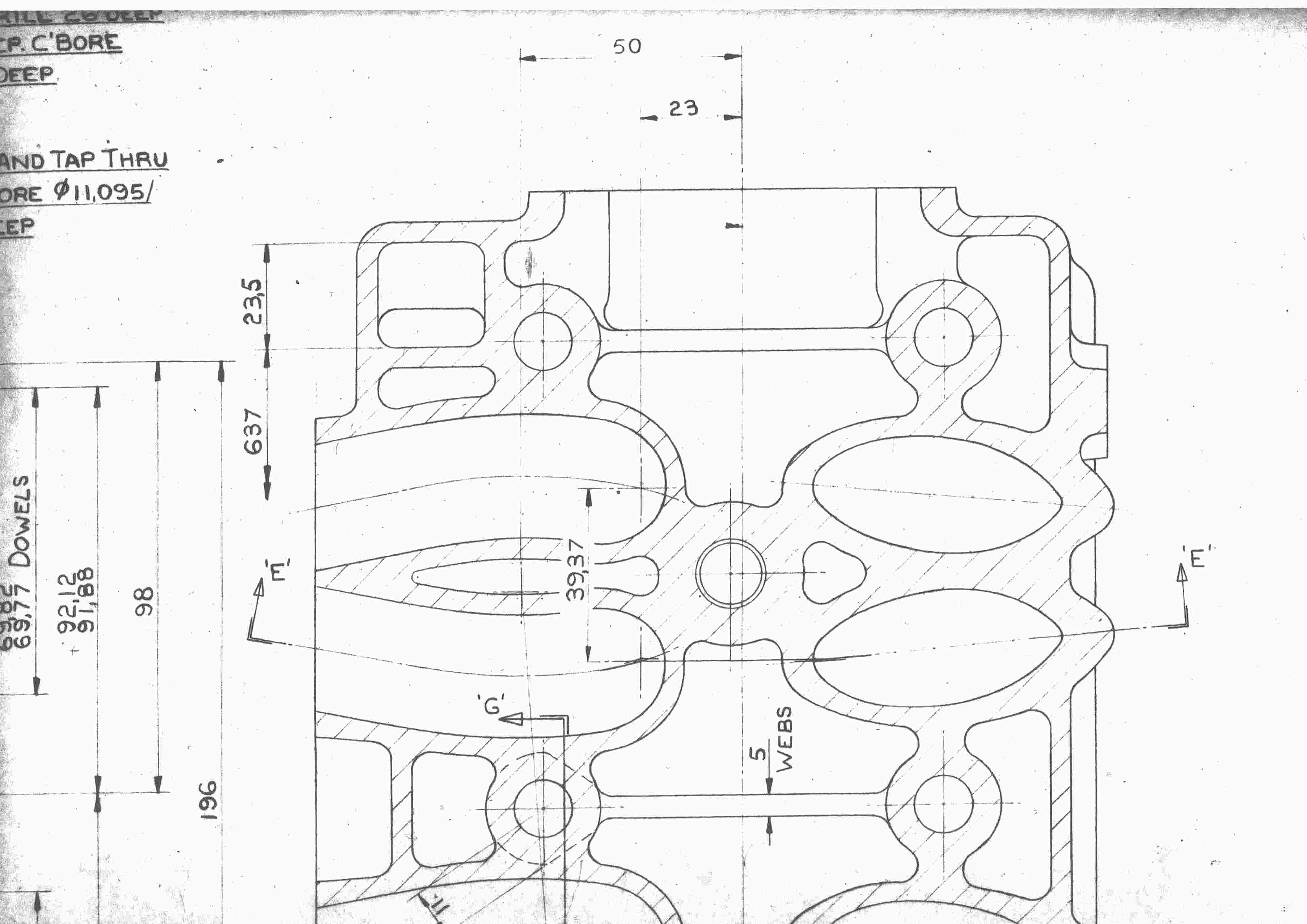 This engine was a step along the way to the Jaguar AJ6 engine and the general layout is not dissimilar to modern four valve designs in widespread use.

In the early 1990s Jaguar put a lot of effort into a two-stroke engine project which for a time looked quite promising. A supercharged 3.2 litre V6 two-stroke prototype produced 350 b.h.p. with far less bulk and weight than the V12 and much better fuel economy by virtue of a lean burn combustion system based on the Australian Sarich air blast injection principle. A lot of other manufacturers were experimenting with this sort of technology but eventually problems with NOx emissions and durability proved to be insurmountable so everybody reverted to the more conventional four valve four-stroke engine that is now so familiar.

It is most interesting to now learn that the pre-chamber principle referred to above has recently reappeared to impressive effect, but now applied to the well-established four valve layout, to achieve unheard-of levels of fuel efficiency at high power outputs. These power units could well be described as turbo-compound hybrids and they are reported as obtaining peak thermal efficiency of around 50% which is amazing when not long ago any conventional petrol engine that bettered 35% was considered exceptional. Mercedes are currently using engine systems of this type to power their dominant F1 race cars, with Ferrari following in hot pursuit and Renault and Honda forced to adopt similar technology.

It is known as Turbulent Jet Ignition described in patents US20120103302 and EP3001008A and promoted by piston maker Mahle. The relevant patent documents can be found on-line: