There have been some very strange engines over the years. Here are a few examples, some of which were surprisingly successful or provided a path to something that was, some were successful for a brief time until the limit of the potential had been reached, whilst others probably never even ran. 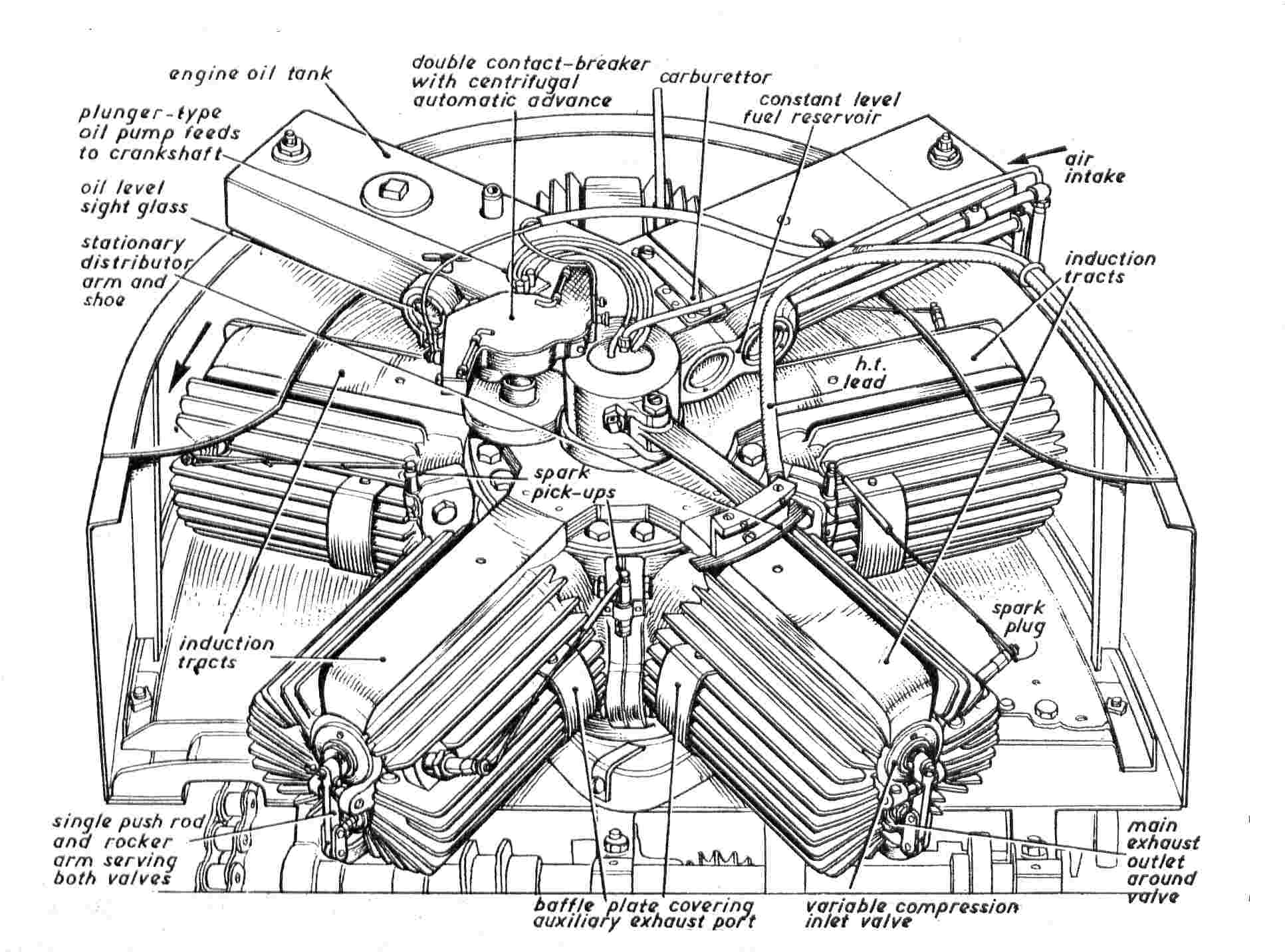 It seems beyond belief that anyone would consider making a motor car with a rotary engine (one in which the entire engine spins around a stationary crankshaft) yet that is what powered the Adams Farwell in the early 1900s.

The entire concept of the rotary engine now seems bizarre but at the time it provided a solution to getting equal amounts of fuel, air and cooling airflow to all cylinders at a time when low thermal efficiency meant that a lot of heat would need to be dissipated and cooling systems were rudimentary and unreliable. It also enabled processes like ignition and valve actuation could be synchronised simply by having stationary cams or contacts located to act for each cylinder as it passed. 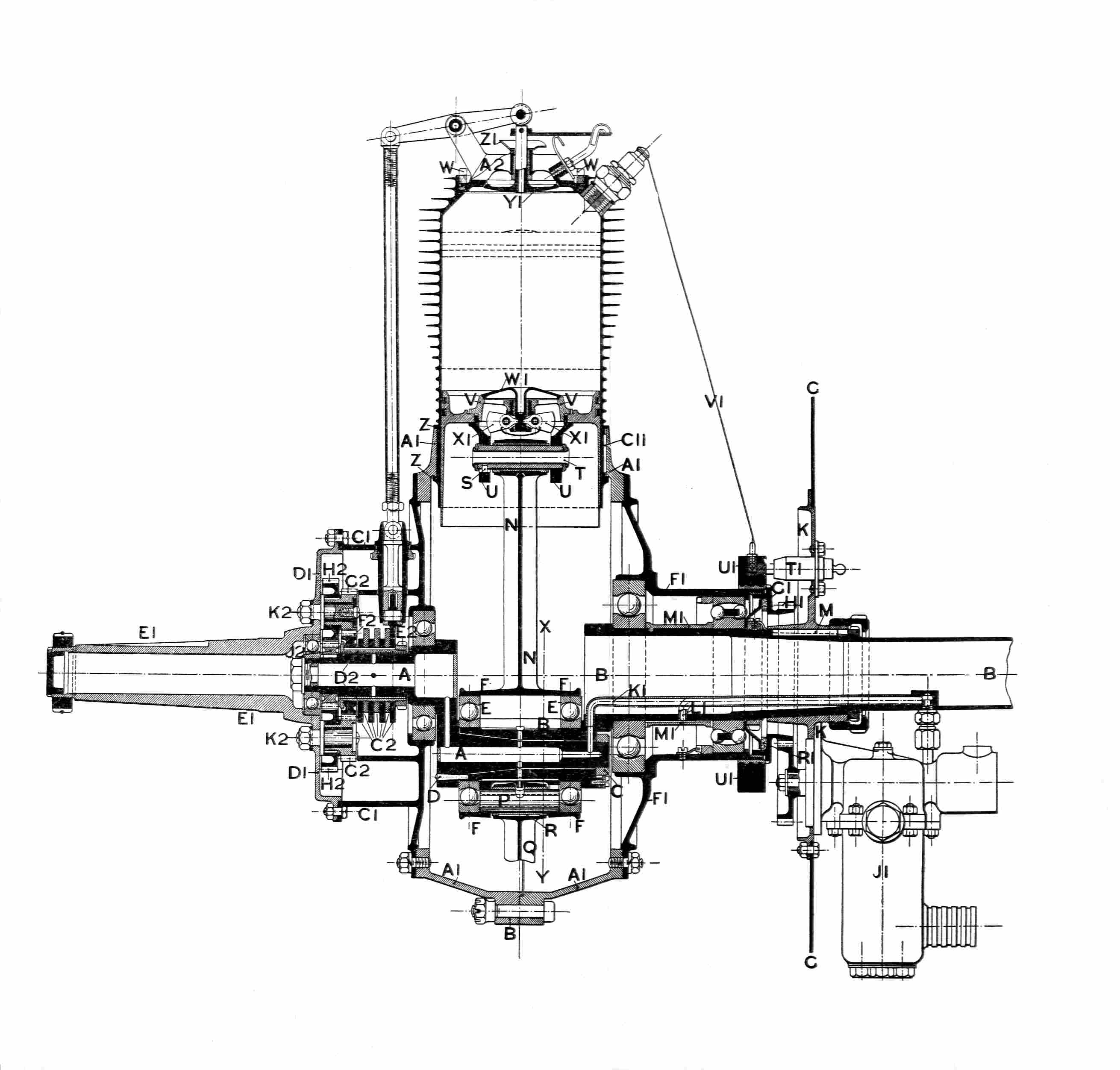 Some would say this engine, a rotary like the Adams Farwell, allowed aviation to become viable more than any other, with its absurdly thin walled (1.5 mm) nickel-chrome steel cylinders and other light weight features. In its original form it had automatic inlet valves in the centre of the piston crowns to admit rich fuel/air mixture from the crankcase to mix with air entering from an exhaust valve that remained open for part of the induction stroke. Only after the exhaust valve closed would a vacuum be produced in the cylinder to induce mixture flow from the crankcase. For this to work there obviously could be no manifolding around the exhaust valves so that flow could reverse as necessary.

The automatic inlet valves had balance weights to counter the effects of centrifugal force which would otherwise open the valves prematurely. A very light spring across the weights ensured closure whilst allowing the valve to open with the slight pressure difference produced.

Centrifugal force acting on the exhaust valves meant that again only a very light spring was required for closure.

The setting of the piston valves was critical to performance, yet they were not easy to access, and failure to close properly could lead to detonation of the entire crankcase charge.

This prompted a redesign to dispense with the piston valves and the result was our next example. 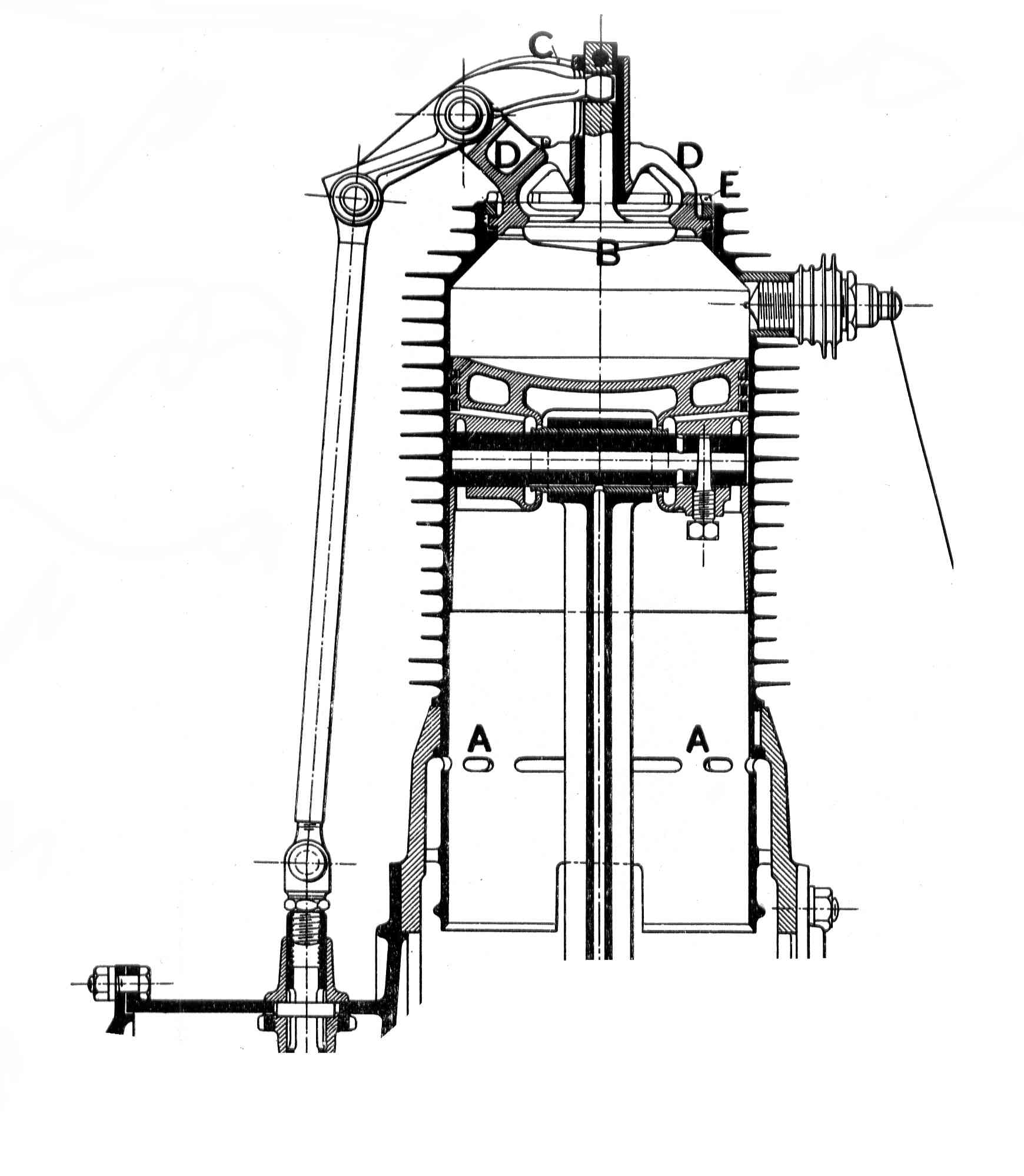 Now with solid pistons the Gnome Mono had a row of ports in the cylinder wall that were uncovered by the piston as it neared the bottom of the stroke thereby admitting rich charge as before. Early opening of the exhaust valve allowed cylinder pressure to drop so avoiding backflow of exhaust gas as the ports were uncovered at the end of the power stroke. The induction of fuel/air mixture took place towards the end of the next induction stroke as before.

Both of these Gnome engines were widely used in the early days of aviation and well into WW1 but larger more powerful rotary engines like the Clerget and then the 200 b.h.p. Bentley carried the type forward but by this time the rotating mass was becoming problematic with gyroscopic precession making aircraft handling difficult. In the hands of a pilot who could master it a Sopwith Camel could make snap turns that defied belief but the same feature could be a death trap for the unwary.

The obvious limitations brought the reign of the rotary to a sudden end with the finish of WW1 by which time better performance was becoming more easily available from conventional engines. 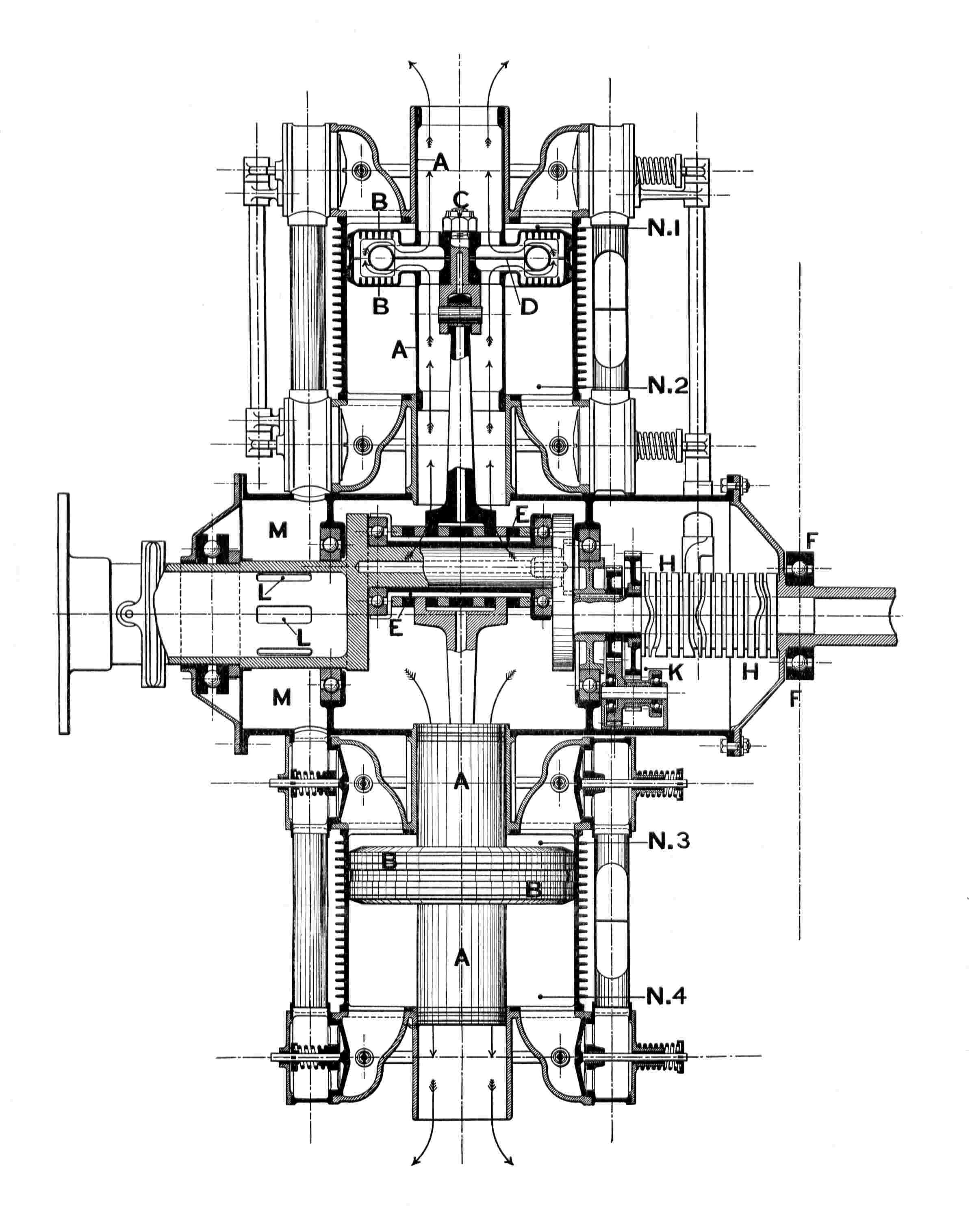 In the days when light weight was an imperative this contraption with centrifugally induced internal air cooling of its complex pistons was intended to be a higher powered rotary engine with six double acting cylinders.

Inlet and exhaust valves were provide for each combustion chamber activated by face cams and links. The exhaust valves faced forwards to benefit from cooling air

It seems unlikely that it could ever have run and produced useful power or held together for any length of time. 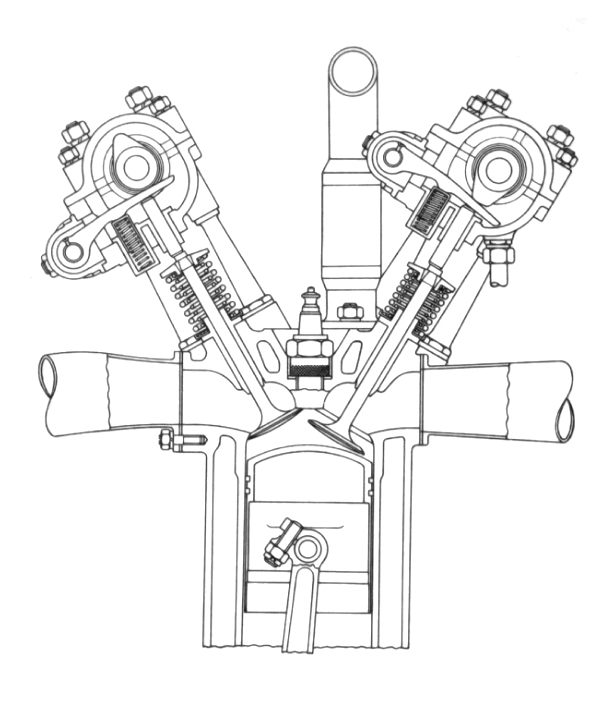 It would be most unfair to call this engine an oddity because its layout is still very relevant today. It was only odd because of its innovative features which marked it out from all the other engines around at the time.

It was the very first four-valve, twin overhead camshaft, racing engine with pentroof combustion chambers and a single central sparking plug, an arrangement that we now regard as normal.

Needless to say, it was very successful.

I found these drawings loosely inserted inside a book dating from 1922 that I inherited from a relative. 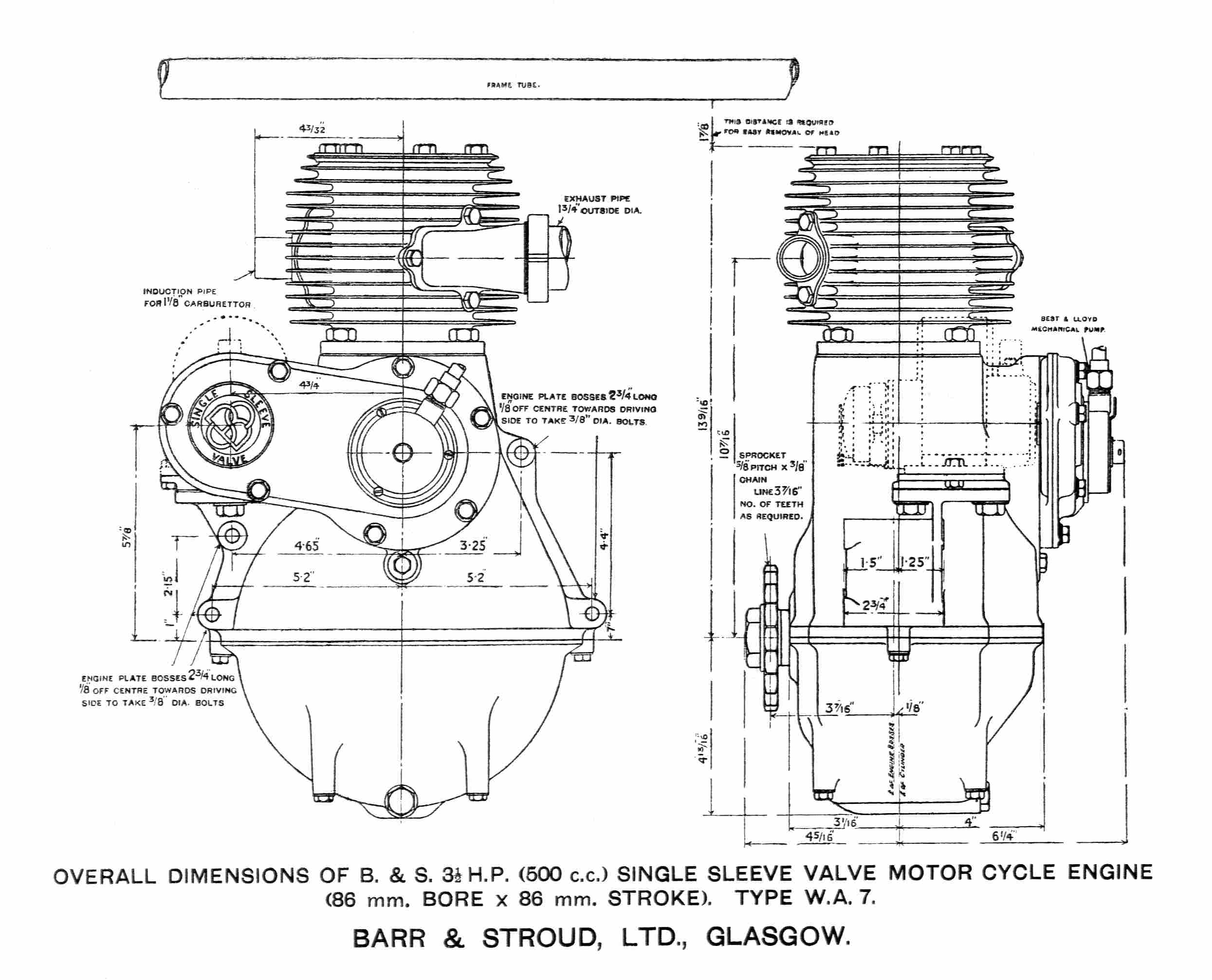 Barr and Stroud were prominent in the field of precision optics and also were early producers of engines using the Burt-McCollum single sleeve valve and may well have inspired Ricardo and others to pursue the principle to great effect. 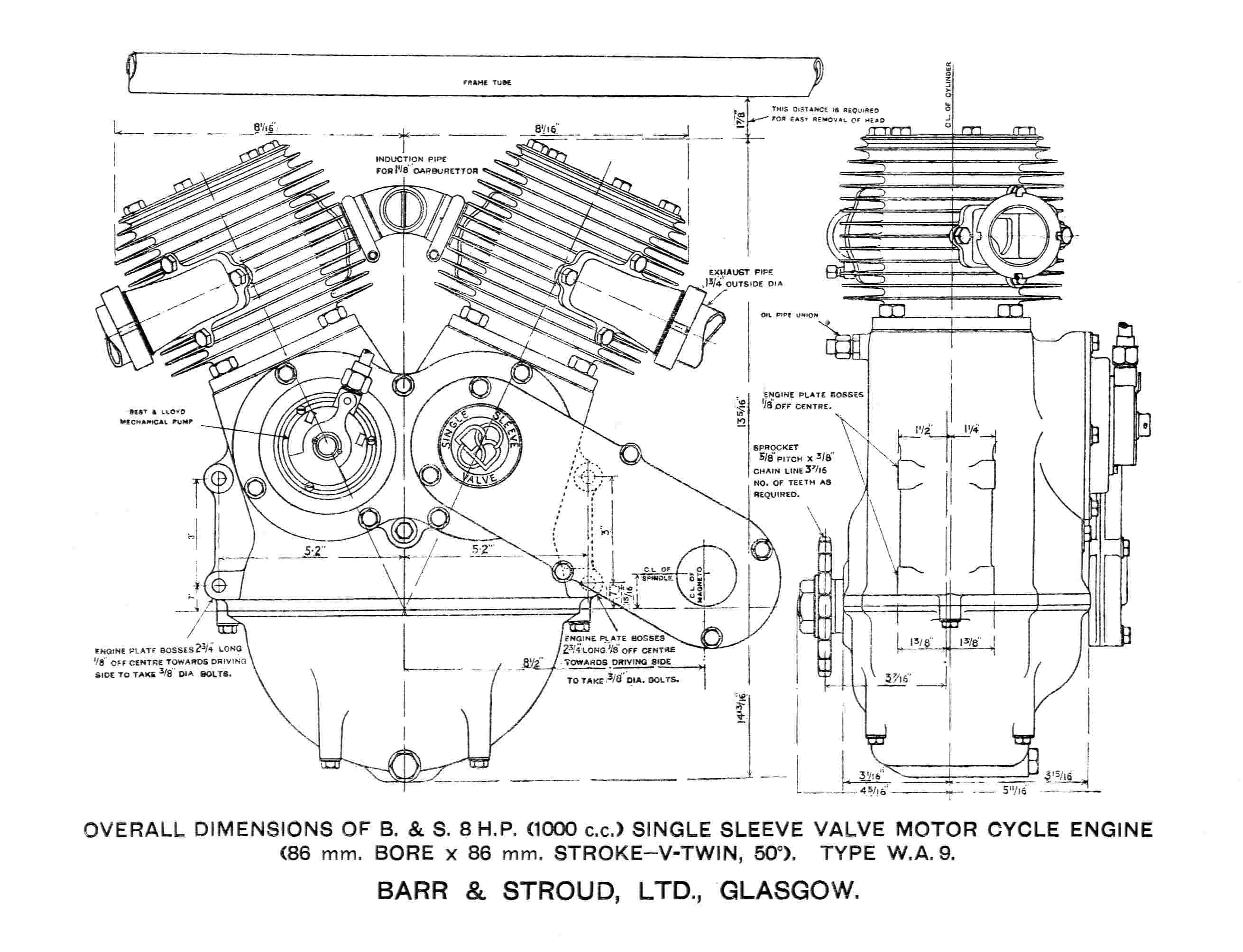 Roy Fedden’s impressive Bristol sleeve valve radial engines were of this type, exemplified by the Taurus, Hercules, and mighty Centaurus, that powered so many aircraft during and just after WW2.

Napier’s H24 Sabre that powered the Hawker Typhoon was another outstanding example.

Had the gas turbine not intervened it seems likely that high powered sleeve valve engines would have been still more widely used, possibly in highly supercharged two-stroke form developed to impressive levels by Ricardo, culminating in the remarkable V12 Rolls-Royce Crecy, which came too late to reach fruition. 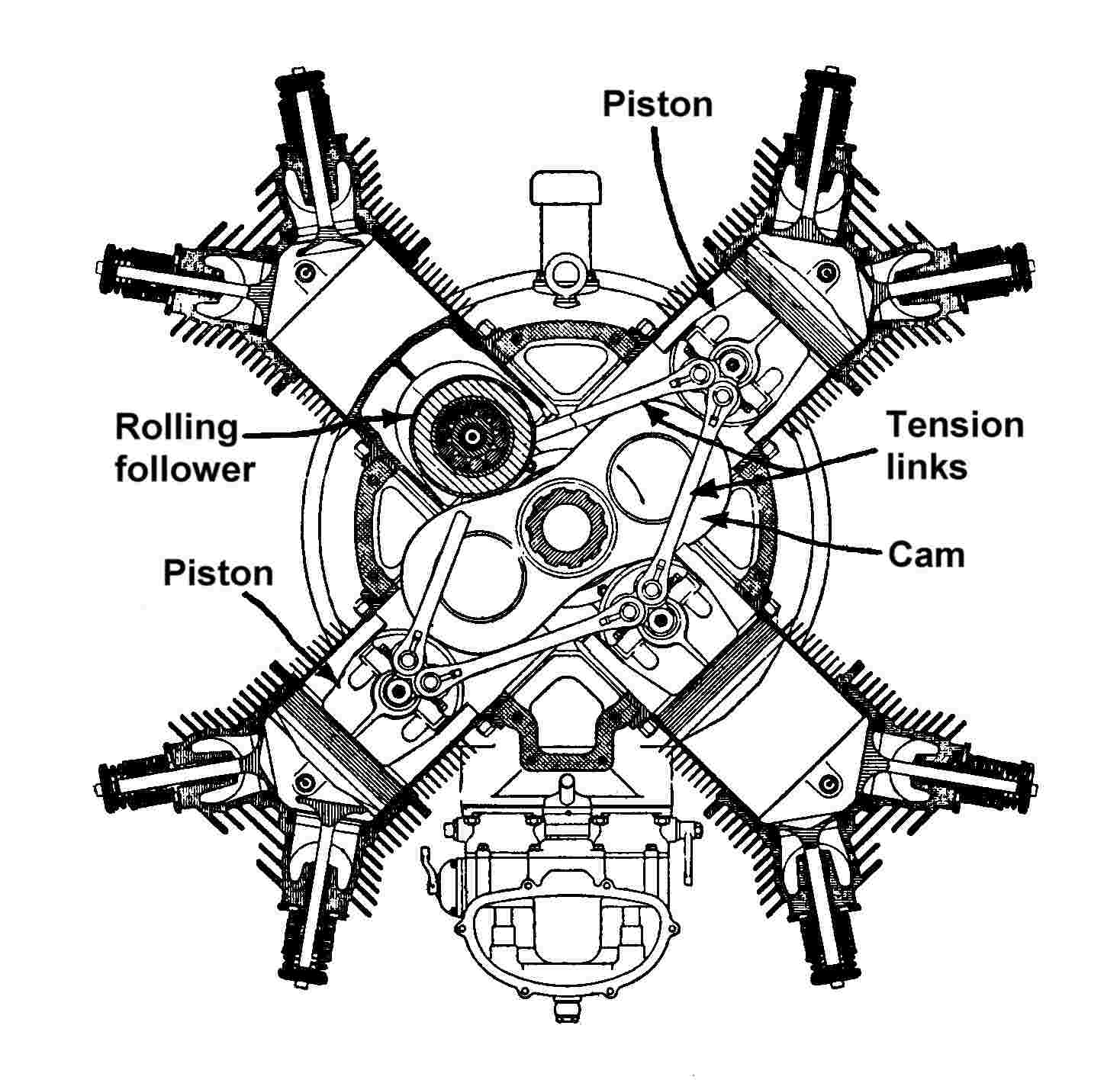 Designed in the mid-1920s by Harold Caminez, the Fairchild Caminez engine was an ingenious device that seemed to have much promise. The main shaft carried a lemniscate (figure eight shaped) cam which propelled four pistons up and down in radially disposed cylinders as it rotated. The substantial pistons, carrying rolling followers, were attached by tension links and moved as opposed pairs thereby balancing out their inertia forces. Also appealing was the feature that each cylinder undertook a complete four stroke cycle for each rotation of the main shaft. The engine was successfully flown, endurance tested and certified but it had an inherent serious problem.

Although the arrangement produced no unbalanced forces in the normal way, because of the interconnecting tension links the inertia loads of the outgoing pistons significantly added to those of the incoming ones so that these combined masses acted heavily upon the waist of the cam as they were slowed to a halt then accelerated again. This resulted in powerful fourth order torque irregularities which could not be resolved. The resulting torsional vibrations made the engine impractical and it was eventually abandoned in 1929. 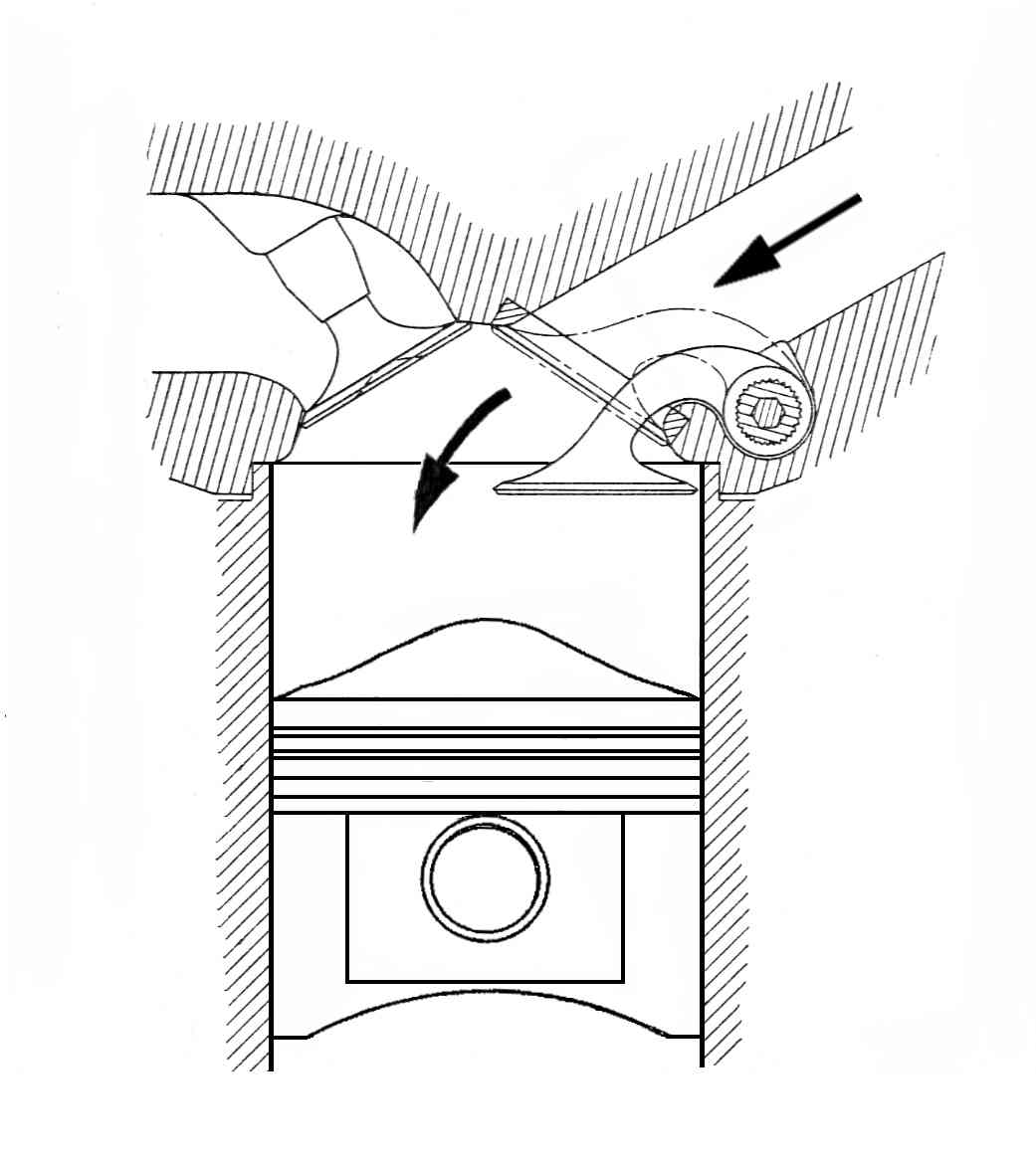 The sleeve valve arose as an alternative to the poppet valve, which at one time seemed to be limiting the potential of conventional engines.

The Butterworth swing valve was another attempt to overcome the perception that poppet valves were a hindrance to optimum induction flow.

Archie Butterworth was a notable ‘character’ in British motor racing in the early post WW2 period, who produced a 1.5 litre flat four racing engine with swing valves operated by pushrods acting on the pivoting shaft and closed by torsion bar springs.

Although the swing valves were troublesome initially, they were made to work and the engine produced over 150 b.h.p. at 7000 r.p.m. This was quite good performance for the time but not enough to keep in front of more conventional engines which were being developed at an increasing pace. 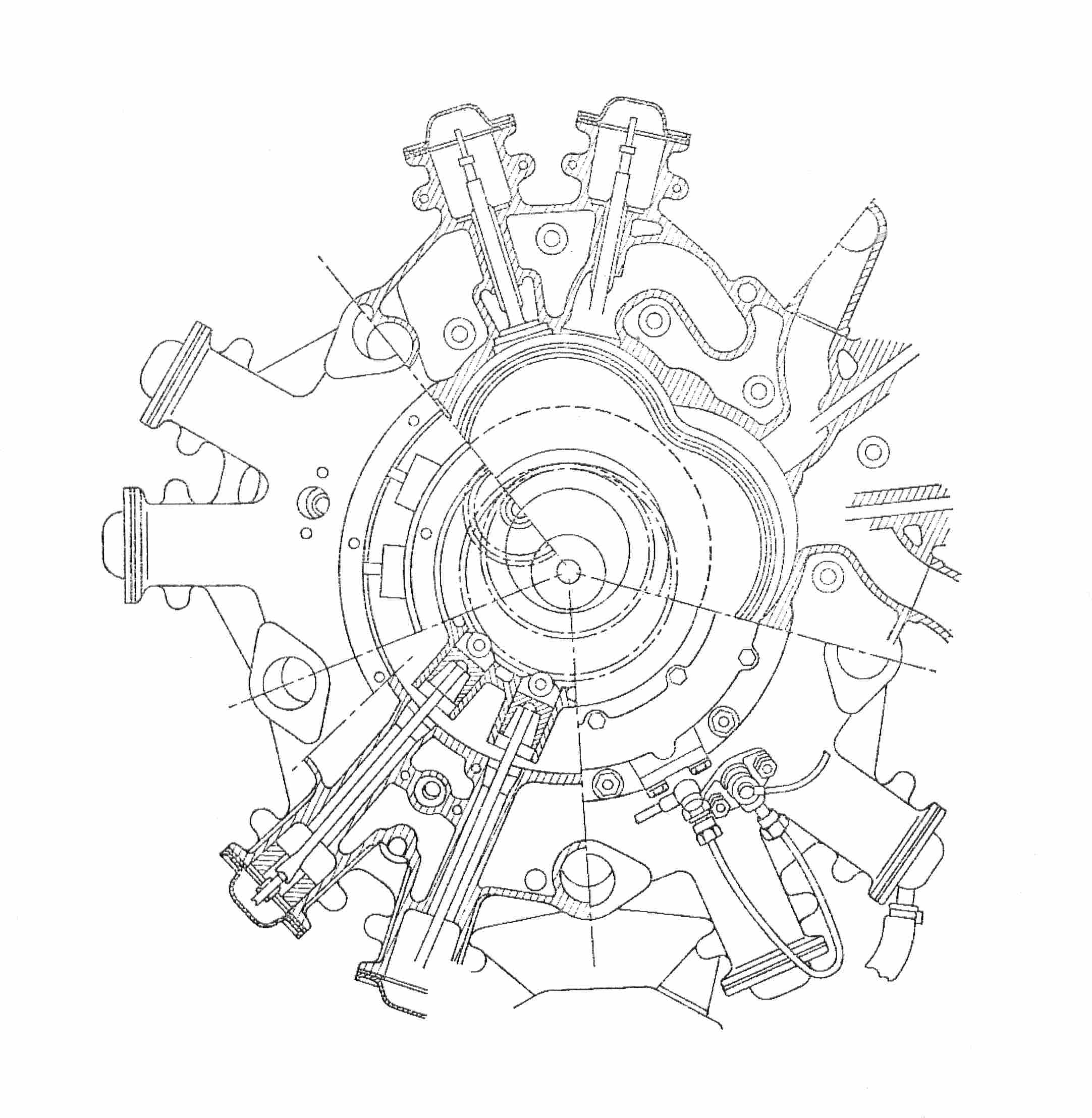 After Felix Wankel’s famous little engine burst onto the public stage in 1957 there was a massive surge of interest in ‘alternative’ engines, few of which had much real merit.

Quite a number of motor manufacturers became receptive to schemes that previously would have been just dismissed as unworkable.

The planetary rotation engine of 1963 resulting from collaboration between Renault and AMC was one example and it seems strange now to imagine how hardened professional engineers could ever have taken such a contrivance seriously. A four lobe rotor moved eccentrically around a five lobe housing much like an eccentric rotor oil pump, but even if the sealing problems could have been overcome, what advantage would it have had over a conventional engine? 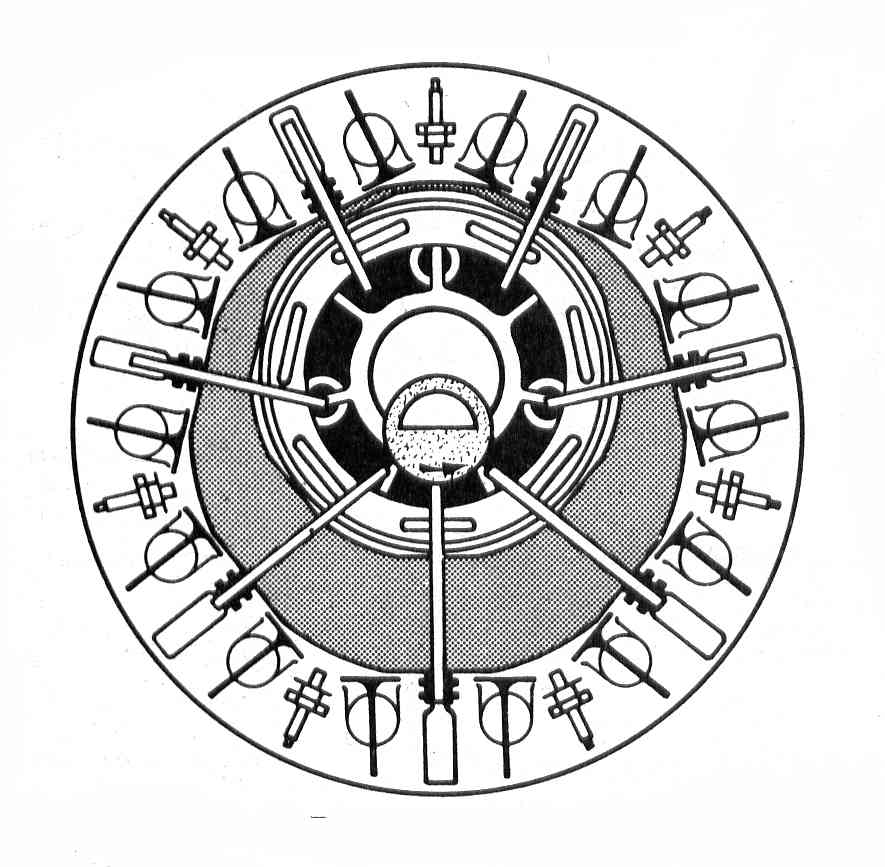 In 1972 stories began to come out of Australia about a new wonder engine that was going to revolutionise the motor industry. It was called the Sarich Orbital Engine and for months the motoring press around the world was full of impressive claims for high power, low fuel consumption, low emissions, compactness, and simplicity, but no details about it were forthcoming. Stories of a 2 litre engine producing 200 b.h.p. and weighing just 100 lbs were avidly propagated by the press without being properly questioned.

Finally, in early 1973 a non-running prototype was at last shown to the public: https://www.youtube.com/watch?v=0SiRqmo5Onc

I have a copy of an article that followed by Phil Irving, a highly regarded Australian engineer who had designed the Repco F1 racing engines that had powered Jack Brabham and Denny Hulme to two world championships. Irving’s incisive analysis of the Sarich engine read almost like a lawyer shredding a contrived defence in a courtroom. From that moment it was a dead duck!

But, Sarich had been hailed as a genius and showered with awards, while vast amounts of money had been committed by huge companies like BHP as well as the Australian government. Not wanting to be seen as fools the people concerned just kept the Sarich Orbital company going in the hope something useful might eventually come from it.

In the early 1990s a number of manufacturers, including Jaguar, experimented seriously with two-stroke engines using what could be described as an air-blast direct injection system devised by Sarich’s company, but it failed to gain acceptance in the motor industry. Problems with durability and NOx emissions proved to be insurmountable although the system seems to have found success in less critical small power unit applications such as outboard motors and scooters.

Ralph Sarich apparently prospered well from all this and then made a fortune in property but no car was ever powered by his original orbital engine. It is rumoured that a prototype did eventually run but was unable to produce any useful power. What is amazing is that such huge resources were poured into something that any competent engineer would have recognised as hopeless right from the start.

Lots of others too…

For those interested in seeing just how many unconventional and odd-ball engines have been proposed over the years there is a remarkable website all about such things here:-

Considerable efforts and investment have been spent over the last hundred years or so, and still are, in pursuit of a ‘better engine’ yet in the vast majority of proposals it is hard to see any merit that might make them viable. Being different or simpler is only advantageous if the inevitable negative aspects are minimal and apparent simplicity soon disappears with progress. Poor conditions for combustion or dissipation of heat from critical parts are common problems. Sadly many inventors of such devices develop an excess of faith in their ‘creation’ and a wilful blindness to the realities.

The conventional poppet valve four-stroke engine has proved to be a moving target that is unlikely to be displaced in the foreseeable future other than by some alternative power source. It is also possible that continuing improvements of the conventional internal combustion engine will make it difficult even for promising alternatives to beat it. The thermal efficiency (around 50%) of current (2017) F1 racing power units would have seemed impossible a few years ago but in ten years time may well be surpassed by mundane production cars and emissions may be down to insignificant levels.