A Note about Exhaust Emissions

The Significance of Exhaust Gas Analysis

There is a well-established relationship between torque, fuel consumption and raw (i.e. before catalyst) gas constituents (see solid lines in Fig. 1) from which one can tell a great deal about what happens inside a spark ignition engine as fueling is shifted either side of the chemically correct (stoichiometric) point. That is why we often advocate exhaust gas analysis as a prime aid for fault diagnosis.

Fueling about 10-15% rich will usually produce best torque (or power) and fueling weak by a similar amount will produce best economy. CO (carbon monoxide) can be used as a measure of rich fueling but O2 (oxygen) content must be used to provide a measure of weak fueling and CO2 (carbon dioxide) reaches a peak of 14 – 15% at the stoichiometric point. Some gas analysers can display air/fuel ratio derived from these gaseous levels.

HC (various unburnt hydrocarbons) reaches a minimum around the best economy point then rises with still weaker fueling because combustion slows down or deteriorates. 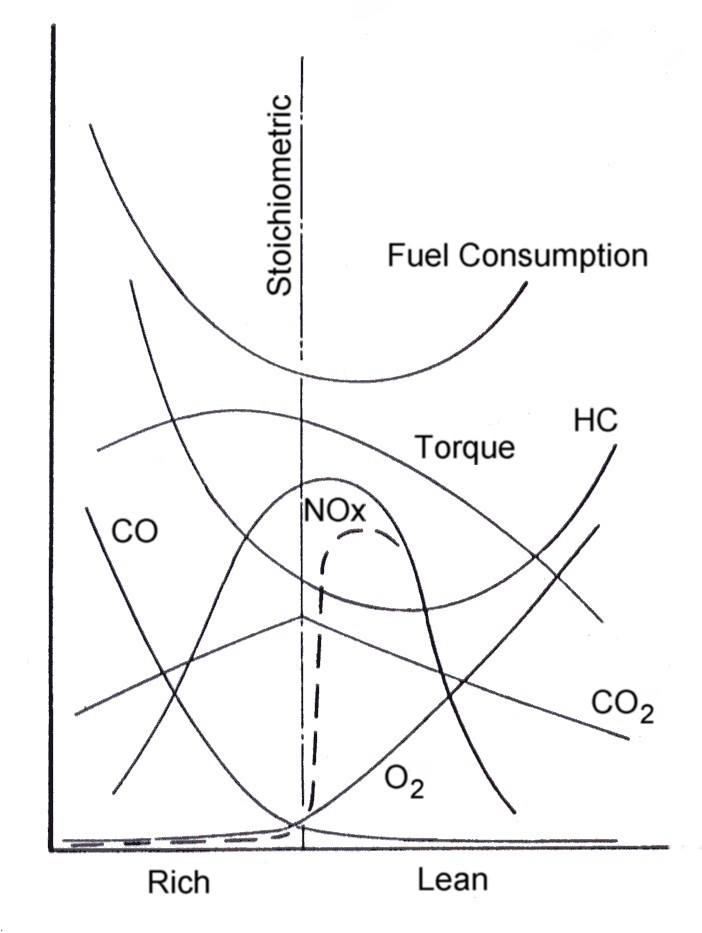 Fig. 1. Response of engine performance and emissions to air/fuel ratio.

Excessive HC is a sure indicator of poor combustion and will always accompany any tendency to misfire well before it becomes apparent to the driver.

NOx (oxides of nitrogen) is dependent on temperature, pressure, and time, so reaches a peak with slightly weak fueling when temperatures are still high but combustion is taking longer. NOx levels recede with much weaker fueling because the flame temperatures are lower but only an engine designed for lean burn can exploit this without the HC rising.

The formation of NOx ‘steals’ O2 that would otherwise be available for normal combustion so if the fueling can be held exactly at the stoichiometric point and the O2 prised away from the NOx there will be exactly the right amount to finish off the CO and HC. This cannot happen inside the engine but a three-way catalyst can make it happen downstream. If the fueling is richer than stoichiometric then there won’t be enough O2 to react with all of the CO and HC but if the fueling is weaker than stoichiometric then, in this O2 rich environment, further O2 will not separate from the NOx, which consequently rises sharply as shown by the dotted line in the diagram. It was the technique of feedback from a Lambda (oxygen) sensor in the exhaust stream ahead of the catalyst that made it possible to maintain fueling close enough to the stoichiometric point for the three-way catalyst to work. This is why the UK MOT requires that the Lambda air/fuel ratio must be held between limits of 0.97 and 1.03 (Fig. 2). 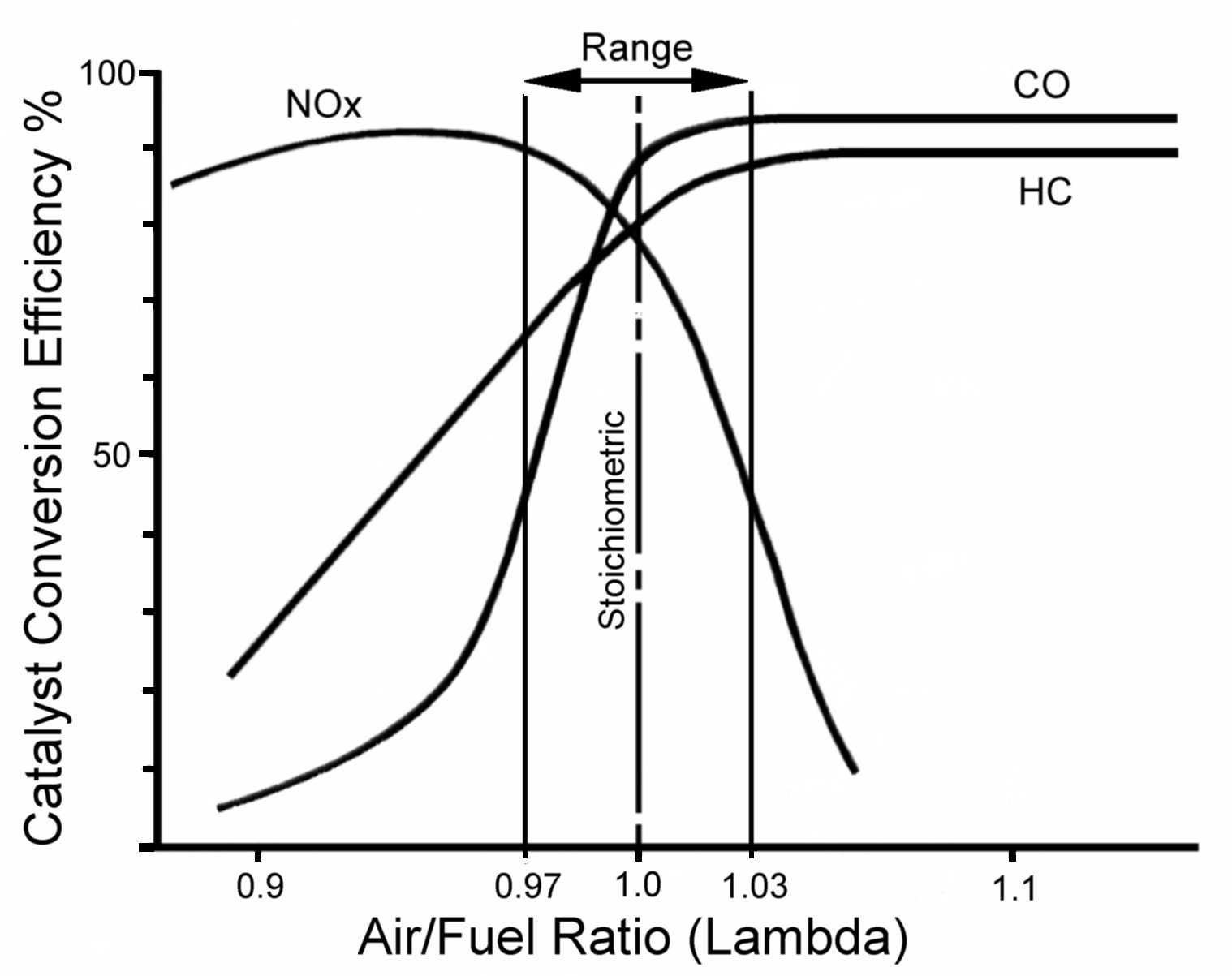 There is a known relationship between CO, CO2 and O2 %age content in the exhaust stream as the air/fuel ratio (or Lambda value) changes (Fig. 3). One thing that is notable is that with the Lambda feedback system holding the stoichiometric point the CO content in the exhaust should be very low – no more than about 0.1% – without need for any catalyst. 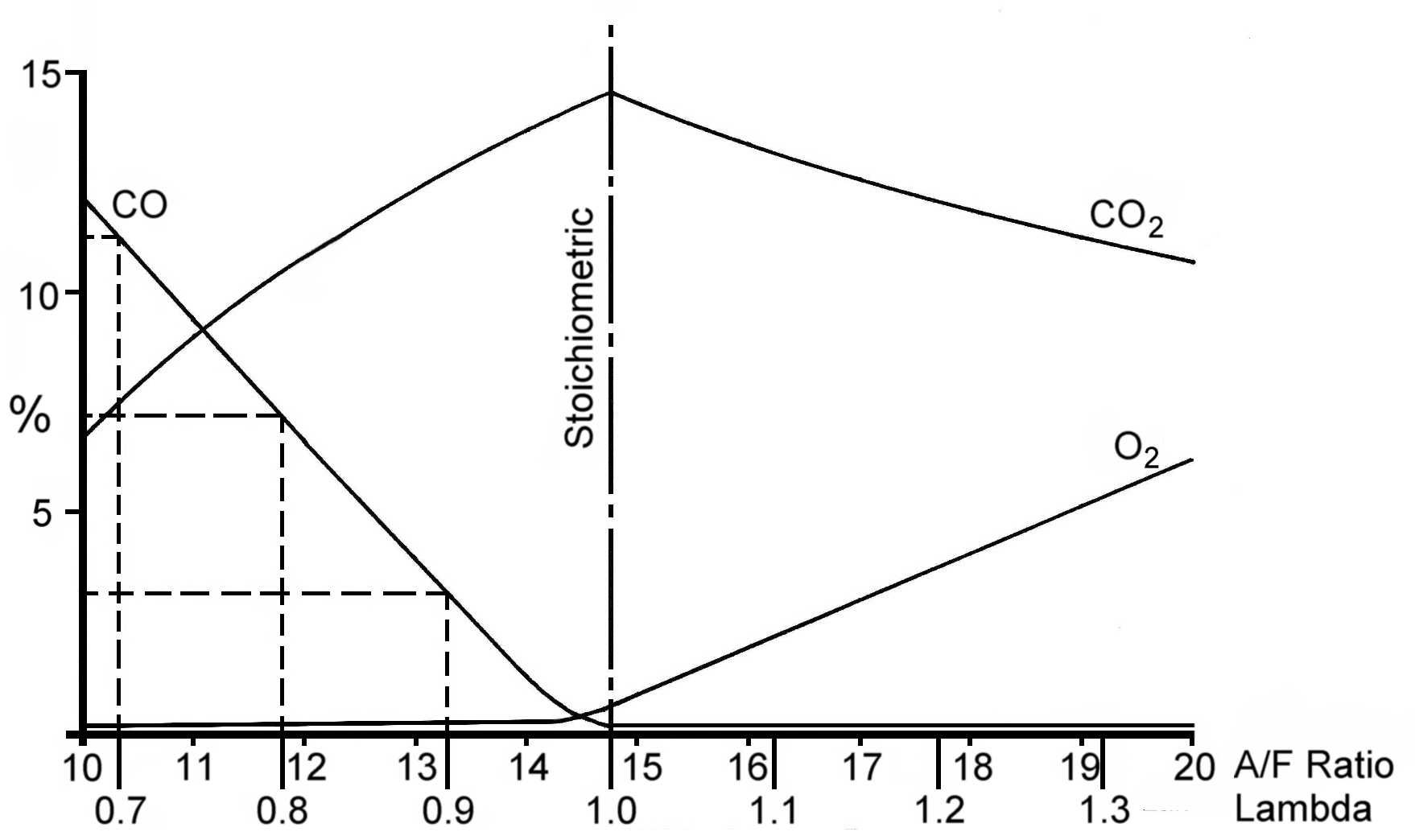 Fig. 3. Concentrations of main gases in exhaust stream according to air/fuel ratio.

HC emissions are often used as an indicator of combustion efficiency, and reach a minimum at about 10-15% weaker than stoichiometric. HC will rise with excessive richness or weakness and will rise dramatically with any misfire condition. A healthy engine running in feedback at the stoichiometric point is likely to display HC, ahead of any catalyst, of around 100-150 p.p.m. at idle and light load.

In the days before catalysts the idle settings for engines with electronic fuel injection were aimed at achieving a stable idle with minimum CO consistent with low and stable HC emissions.

This would generally mean an idle speed of around 750 – 800 r.p.m. with CO at about 1 – 2% and HC at about 150 – 200 p.p.m. Carburettor engines had tended to need a richer setting of about 3% CO to obtain a similar stable condition. If HC emissions are unstable and above about 350 p.p.m. then there is probably something in need of attention. Misfire will always result in high HC readings of 1000 p.p.m. or more.

When idling the combined effects of high manifold vacuum and low speed result in substantial exhaust dilution of the incoming charge, necessitating a slightly rich mixture to obtain stable combustion. Minor manufacturing variations assume significant importance in these circumstances and whilst the overall fueling can be fixed, it is usually essential to be able to trim the idle mixture to suit individual vehicles unless there is Lambda feedback achieving the same effect.

A Lambda feedback system should stay close to the stoichiometric point with a raw CO level of around 0.1% and HC stable and low. A slight loss of idle quality was often observed with early installations which improved with modern combustion chamber designs.

To ensure consistent results emissions should not be measured after a prolonged period of idling or while the electric fan or other engine loads are operating. The engine should be cleared every few minutes by lifting the r.p.m. to 2 – 3000 for about 20 seconds. This will also maintain a catalyst and Lambda sensor (unheated type) up to operating temperature. Allow the engine to return to idle and take the measurement when it has stabilised again, usually after another 10-20 seconds or so. It is of course important to ensure that the idle speed is correct because any significant change of idle fueling may also change the speed unless there is electronic idle speed control, in which case the base setting must be correct.

In a light load cruise condition modern non-catalyst injected engines will run with a weak mixture for best economy, therefore CO will be minimal and the presence of slight excess air and improved exhaust scavenging compared to idling will reduce HC down to 50-100 or so p.p.m. This condition can be more or less simulated simply by opening the throttle slightly to lift the engine speed to about 1500-2000 r.p.m. If the speed is raised much higher than this with no load the engine may then be operating in an unrealistic condition and what seems like vague misfire may be apparent even from a healthy engine due to the high vacuum having a spoiling effect because of exhaust retention and consequent cycle to cycle combustion variability.

Full load usually requires enrichment for maximum power and a CO level of 3 – 5% would be typical, however a fair proportion of current production cars seem able to run weaker at about 2% without any loss of power. It is not unknown to find low speed full load producing 6 – 7% CO to prevent detonation. HC emission at full load may rise to about 400-800 p.p.m. with full load enrichment or would remain very low without it.

Opening the throttle will normally cause a noticeable temporary increase of both HC and CO from acceleration enrichment. Throttle closure may cause a brief HC increase as traces of fuel deposits evaporate from the port walls with the increasing vacuum. CO may hardly alter or may rise noticeably depending on the system. Some have weakening compensation (the reverse of acceleration enrichment) with throttle closure, others do not.

Similar short-lived responses will often be seen from a Lambda system before it corrects back to stoichiometric fuelling.

Considering that a non-catalyst car from the 1980s without Lambda feedback would typically produce HC of around 100-150 and CO well under 0.5% in the raised idle situation, it should be clear that a modern car with Lambda feedback in sound condition should never have any trouble complying with these requirements without need of a catalyst. If therefore a car fails an emission check with excessive CO then the problem is not the catalyst but an inability to achieve correct fueling, although it is possible that an efficient catalyst will alleviate the situation to some extent.

It is often observed that when a car has a broken up or melted catalyst the CO reading is too high, which can lead to the erroneous conclusion that the catalyst is necessary to achieve the required low CO figure. In fact the catalyst will usually have failed because of the fault condition that resulted in excessive CO.

If, for example, a failed emission test produces a print-out showing a CO content of say 0.35% yet a simultaneous Lambda reading of 1.00 then there is an inconsistency indicating that there has to be a combustion problem of some sort, perhaps fouled injector(s), or spark plug(s). The resulting partial misfire will leave spare oxygen in the exhaust stream (as of course will any air leakage into the system) which the Lambda feedback system will try to eradicate by applying rich correction. In an extreme case a faulty cylinder may appear normal and the others will appear to be rich, which can cause confusion to the uninitiated. Such a misfire will lead to more vigorous activity in the catalyst causing it to overheat and possibly melt down, which, of course is a symptom, not the cause, of the failure to meet emission standards.

The Benefit of Emissions Legislation in the USA.

When one looks at the vehicle emissions reductions that have been achieved from the 1967 starting point (Fig. 4) the demand for zero emissions might seem to be an example of obsessive thinking. The massively increasing cost and resources needed for the final ever-smaller increments of change seem to be out of all proportion to the practical gain. The funding can only come out of taxation, profitability or showroom prices, so ultimately the consumer is the one who pays for it all.

By the year 2000 emissions from new vehicles had been reduced in real terms by about 95% from the 1960s starting point, which is quite a creditable achievement. To pursue further reductions becomes more difficult, more expensive, and of more doubtful benefit, but the means now exist to demand it so that is how it will be. If only governments could control economic forces so well and reduce crime and other causes of misery by such proportions. Perhaps it is too tempting for politicians to just concentrate on the softer targets.

Such a substantial reduction of emissions was undoubtedly a major improvement but of course it was never going to stop there. These matters always seem to fall victim to the ratchet principle. 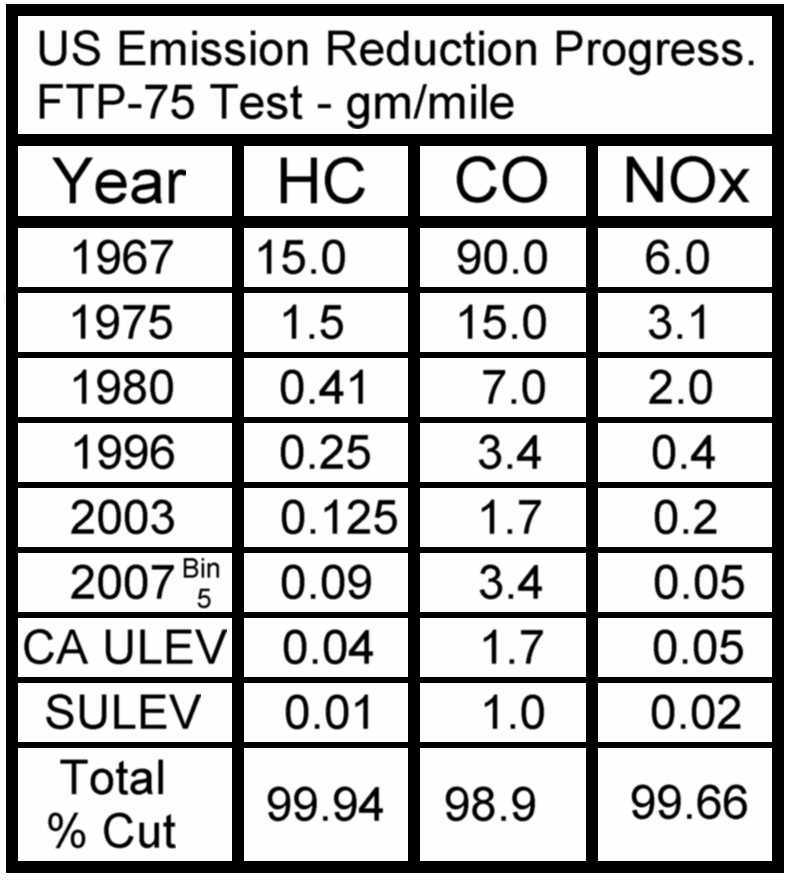 Few politicians or bureaucrats ever want to risk being accused of not taking a threat seriously enough once it has been brought into public perception. Indeed, with the media baying for action, it often looks better politically to press for the most stringent controls possible, rather than a reasonable solution that provides an adequate response at an acceptable price.

It is easy to fall for the idea that, for example, a 40% cut in emissions must be desirable but maybe it is not quite so enticing when it is pointed out that this means 40% of what is left after there has already been a reduction of 95%. In other words the true reduction is not 40% but just 2%. It doesn’t seem to be quite such good value for money then.

Surely it is enough to find a level that the environment can reasonably tolerate, something it actually seems to be quite good at, having to deal with natural catastrophes such as volcanic eruptions, tsunamis, forest fires, etc. Even for us humans there must be exposure levels that fall below any danger threshold, which seems to be true even of radioactivity.

This subject is dealt with in much more detail in our publication at Jagweb.com: