Modular operation of the Jaguar V12 In pursuit of improved fuel efficiency.

Modular operation for improved fuel efficiency was thoroughly investigated at Jaguar in the mid-1970s as a possible alternative to the HE development. It so happens that I had responsibility for this so called ‘split twelve’ project and subsequently sold aftermarket conversions so I guess I know a bit more about modular V12 operation than most.

Anyone who appreciates the efficiency losses caused by throttling an engine will recognise the potential for economy gains from disabling part of the engine during light load operation and running the remainder at a wider throttle opening. Running on a few cylinders at better efficiency must be more fuel efficient than running on all of them at lower efficiency. Pumping losses and exhaust residual contamination of the charge are both significantly reduced although the other friction losses of the total engine are more or less the same as normal. Of course, the available flywheel torque is less than that of a conventional engine of similar size.

In dynamometer tests we investigated a number of operating modes for the dead bank of cylinders including: no compression with vented spark plugs (least efficient); closed throttle; half throttle; wide open throttle; zero lift camshaft (most efficient). We later also investigated operation as a V6/V12 about which the only notable thing was a rather appealing exhaust note. 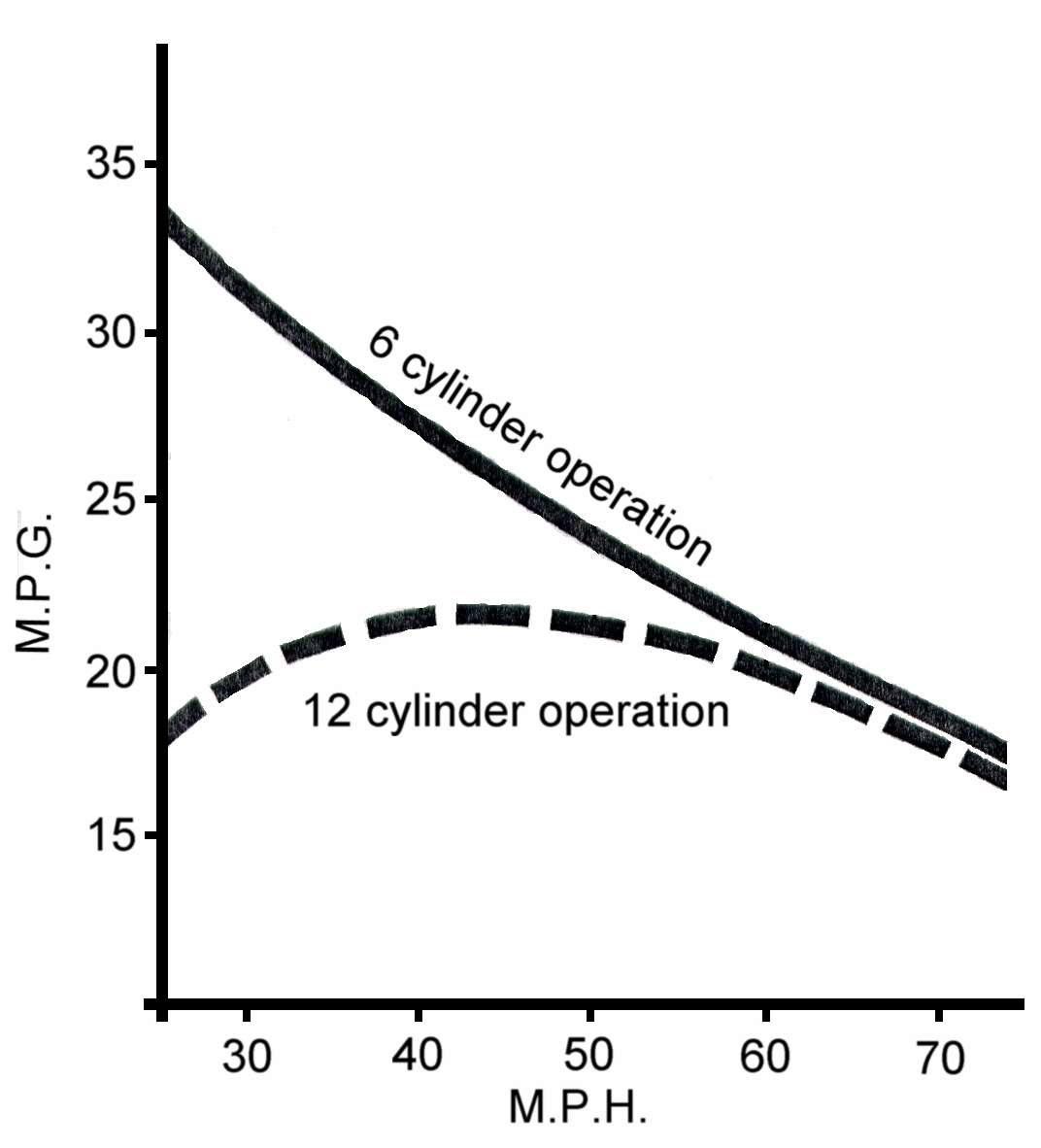 Potential difference in fuel consumption between 6 and 12 cylinder operation.

The graph shows that the potential fuel efficiency gains were considerable at low to moderate road speeds using the zero lift cam (no valve actuation). The wide open throttle condition provided very nearly as much improvement and was considered to be a more practical strategy to adopt.

A prototype car for road assessment was produced with a supplementary throttle attached to the front of ‘A bank’ inlet manifold, operated by a vacuum servo that could provide instant switching between full load on one bank to part load on both, with increasing demand. Selective operation of ‘B bank’ injectors was controlled in unison with the supplementary throttle. The right hand ‘A bank’ was chosen for continuous running mainly because it was known to be the better of the two for emissions.

Drivability was quite reasonable although there was a tendency to produce the occasional spit-back as the dead bank fired up.

A second version was also devised using a solenoid operated supplementary throttle feeding into a balance pipe between the two manifolds.

In this form the car was driven over a standard test route used routinely for mileage accumulation so there was a wealth of data available for comparison. Significant fuel efficiency gains were achievable but the car was rather sensitive to driver technique. In other words there could be a wide difference between a sympathetic driving style in pursuit of the best result, and a more indifferent approach.

No attempt was made to run an emission test because it was obvious that there would be considerable problems developing a satisfactory catalyst system able to cope with the fire-up emissions from the dead cylinder bank. This was the main reason the project was eventually abandoned when the May ‘Fireball’ combustion chamber emerged as being clearly a more practical way forward.

The aftermarket conversion evolved through two versions. The first used the same selective shut down of ‘B bank’ but with no supplementary throttle arrangement. It was reasoned that in single bank operation both halves of the engine would be near to a wide open throttle condition for most of the time anyway. A foot operated switch to the left of the brake pedal was used to activate the second cylinder bank, an arrangement which was surprisingly acceptable in use. The injectors on B bank were controlled by a supplementary ECU which interrupted or passed the normal injector pulses as required. It also provided a brief period of fire-up enrichment decaying away over two or three seconds which eliminated the spit-back problem noted earlier. A temperature sensor input disabled the system from a cold start until near to fully warm and there was also a solenoid air valve to maintain the required idle speed.

The second version (see photo) used more sophistication with a new ECU which sensed load and controlled B Bank cylinders in pairs – 1 & 6, 2 & 5, 3 & 4, – so the engine could run on 6, 8, 10 or 12 cylinders according to demand. The cylinder selection process included a rotation strategy so the work was shared equally. As before there was fire-up enrichment and disablement at low temperatures and briefly from a hot start, and two level control of idle air. The writer designed both of these ECUs. 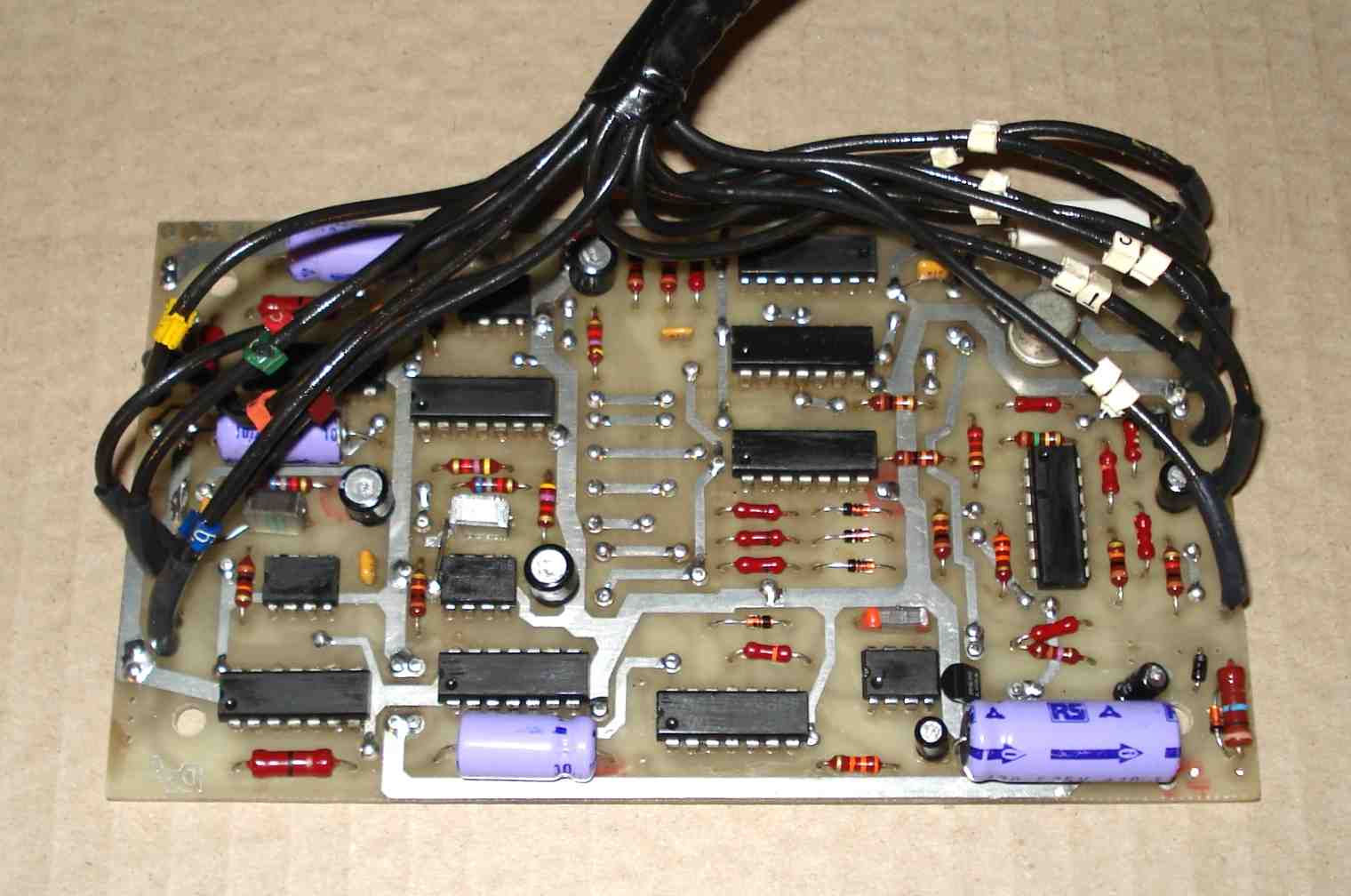 ECU for control of modular operation with selective cylinder groupings.

In order to extend the range of modular operation a camshaft with reduced lift and duration was designed for use initially just in A bank. The extra flexibility this provided prompted use of the same cam profile in the other cylinder bank with a noticeable improvement of full throttle mid-range performance and acceleration.

Because of the widespread fixation with maximum power figures this cam was not found to be viable as an aftermarket product.

It should not come as any surprise to observe that idle quality in single bank operation is much improved as a result of the higher load on the running cylinders and less cycle to cycle variation. This is primarily because of less exhaust residual contamination of the incoming charge and because ignition and combustion take place with higher charge density.

Whilst the modular strategy was quite effective on a flat head V12 it was far less so when applied to the HE version. The reason is simple – the HE was essentially developed for good part throttle efficiency exploiting abnormally high compression with a lot of vacuum advance to counter the retarded timing needed to avoid detonation at full throttle. Part of the economy gain of the HE resulted from the 2.88 axle ratio but this becomes a negative factor for modular operation because the engine is nearer the limit of performance on a single bank so spends less time in that mode.

That all happened a long time ago but we still sometimes use single bank operation as an aid for developing performance modifications. We have a specially modified 16CU that permits the driver to select either cylinder bank or both of them. Prolonged full throttle operation can be undertaken without putting much thermal load on the cooling system, and in road test conditions without inviting the attention of police cars. It also makes possible switching between one bank of cylinders and the other to instantly gauge the effect of a performance modification applied to one bank only.

A feature of running with disabled cylinders is that the spark plug firing voltage rises in the absence of fuel, producing peaks in the coil secondary waveform which can cause a 16CU triggered from Lucas ignition to over-count the speed signal. The ECU trigger input must therefore be altered to filter these spikes out.

The only way the modular principle could be feasible with carburetors would be if the induction tract feeding the dead cylinders were vented to atmosphere to obtain wide throttle operation, whilst preventing any fuel being dispensed by the carbs. Running one bank at wide throttle and the other at closed throttle would be close to the worst possible condition.

Perhaps the most interesting examples of modular engine operation have been seen in F1 racing. It became common practice for F1 race engines to disable cylinders during idling, partly to conserve fuel and also to reduce heat build-up when radiator air flow is almost non-existent. Until it was banned the practice of using exhaust gases to aid aerodynamic performance combined cylinder disablement and retarded timing to maintain high gas flow in light throttle operation whilst cornering. This gave rise to the rather unpleasant staccato exhaust beat which many cars emitted when entering a corner.

Modular operation is now often used in production cars, with perhaps one of the most notable examples being the new Aston Martin DB11 with a 600 b.h.p. 5.2 litre twin turbocharged V12 that runs on just one bank of cylinders in light load operation – just like the Jaguar ‘Split Twelve’ project all those years ago.